The winners of the first international drone photography contest, organized by social network Dronestagram, have been revealed!

Launched May 15 in a partnership with National Geographic, it is a successful first edition with over 1500 photos published and a global participation. Winning authors come from Indonesia, Singapore, Mexico, Bulgaria and France.

According to the members of the jury composed by Dronestagram and National Geographic France team, “picking winners was a very difficult task especially because of the great quality of the photos that have been submitted. We tried to reward the photos that show the best the fantastic potential offered by drones in terms of image. “

The “most amazing aerial view” price was won by an Indonesian drone pilot who managed the feat of shooting an eagle in flight. Very pleased to have won the first prize, the author told us the story of this great performance :

“The photo was taken on 2012, we were working on aerial photos for eco-tourism spot at Bali Barat National Park (west Bali, Indonesia) . We were taking vertical aerial photos using autopilot. Suddenly the eagle came and chasing our drones, so I decided to take over and switch to manual control. After few minutes we discovered that the eagle did not attack the drone but chasing and playing with it. So we decided to do manual fliying (with fpv) and make the eagle chase the drone and do maneuver so the eagle positioned just in front our camera.  So it just a huge luck and a perfect moment combination.” 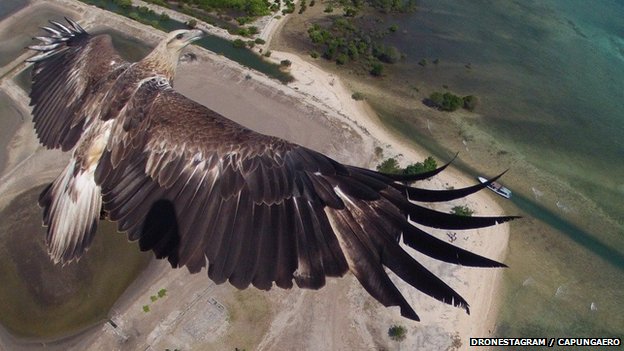 The arrival of cheap drone technology – and small, light high-quality cameras – has given rise to a new genre of beautiful aerial photography and film-making.

A new competition, sponsored by National Geographic, has highlighted some stunning examples of drone photographs taken in the past year.

The winner of the competition was a stunning view of an eagle soaring high above a national park in Indonesia.

Below are the other winners, as selected by a panel of judges.

More photographs can be seen on Dronestagram, a site dedicated to the images taken in mid-air. 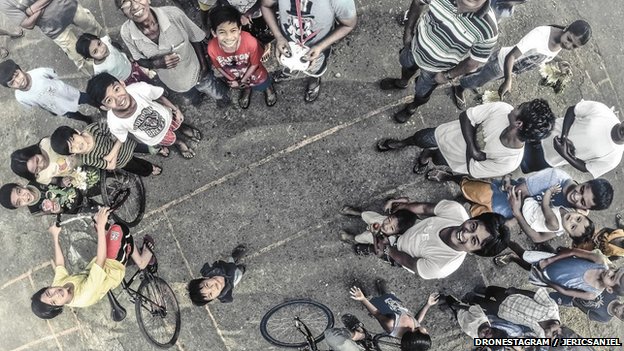 “I was flying in the park one Sunday morning when suddenly people had become really interested with my drone,” says the photographer of this shot which was taken in Manila 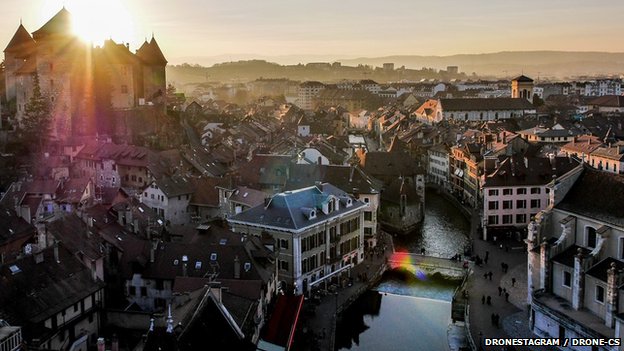 The sun setting over the picturesque town of Annecy, south-eastern France

Awards of the most liked photos

As well as the judges’ prizes, awards were also given out for the most popular photographs among visitors to Dronestagram. 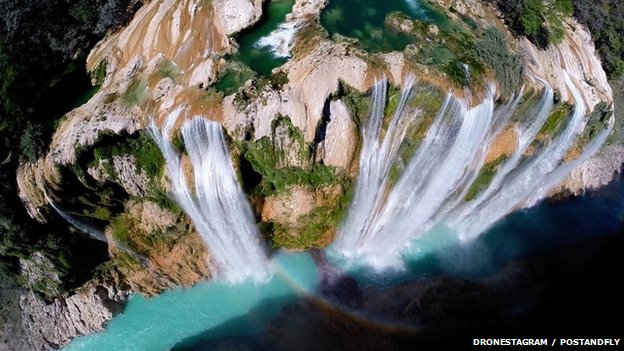 The Tamul waterfall in Mexico is famous for not only being enormous – 105m (344 ft) tall – but also for the beautiful crystal-clear water found below it. 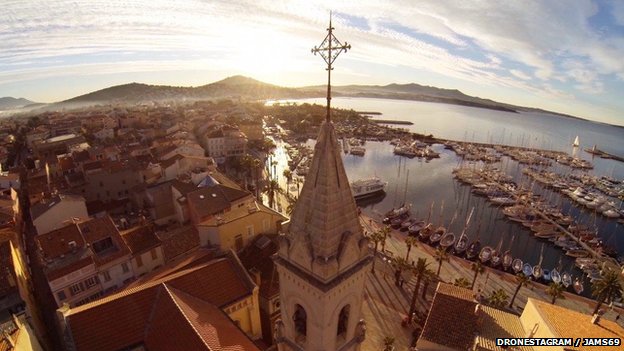 South-eastern France again proving to be a popular location for drone photography – this is a shot of the Paroisse Catholique Saint Nazaire, in the small town of Sanary-sur-Mer 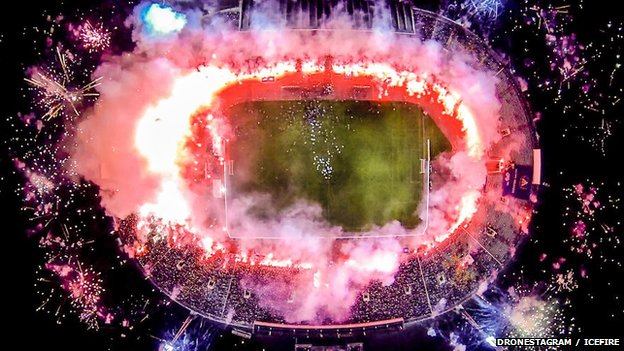 A firework display to celebrate the 100-year anniversary of two of Bulgaria’s biggest football teams.

In a blog post, the search giant said it’ll make it easier for users to go “incognito” and pause data collection as they use Google’s mobile apps. It’s also adding proactive account security recommendations to its Security Checkup tool.

Google also said it’ll allow its users to auto-delete their data after 18 months.

The privacy changes come months after European regulators opened an investigation into Google’s processing of location data on the continent.

Meanwhile, stateside, Google is one of many Silicon Valley tech giants also facing renewed questions about how they reconcile protecting users’ privacy while still providing their technology to law enforcement, amid protests against police brutality in the wake of the killing of George Floyd.

Over a thousand of Google’s own employees have asked the company to stop selling its technology to police departments across the United States. Amazon, IBM and Microsoft have already pulled the plug on selling their facial recognition technology to police, but left a wide berth to still sell to federal law enforcement.

Google is also facing a $5 billion class action suit in California for allegedly pervasively tracking the internet use of its users through their browser’s “incognito” mode.

“Pax8 is in the business of simplifying the cloud buying journey for MSPs, and this partnership with NewCloud enables our partners to seamlessly go to market with Veeam-powered backup and disaster recovery cloud solutions,” said Ryan Walsh, Chief Channel Officer at Pax8. “Together, our certified cloud experts will help partners with their cloud deployments in a cost-effective and secure way. This partnership will also save our partner community time because it eliminates the need to report monthly Veeam usage.”

NewCloud Networks is a Platinum level Veeam Cloud and Service Provider (VCSP) with data centers in nine locations across the USA. Pax8 partners can now offer their end users a cloud repository without the hassle of deploying and managing their own data centers, while seamlessly integrating NewCloud Networks’ cloud infrastructure as a backup and disaster recovery target.

Veeam Cloud Connect is a fully integrated feature of Veeam Availability Suite v10. The solution enables MSPs to offer any Veeam customer a modern approach to data protection and business continuity. NewCloud removes the complexity and offers the support MSPs need to sell and install Veeam-powered backup and disaster recovery solutions for their clients.

“We are excited to become a Pax8 vendor partner and to offer our best in breed cloud solutions, powered by Veeam Cloud Connect, to Pax8’s partner ecosystem,” said Sam V. Kumar, NewCloud Networks’ Founder & CEO. “NewCloud’s nationwide ultra-low latency network with data centers in nine locations makes it easy for partners to leverage and scale existing cloud infrastructure, rather than deploy their own. With the help of Pax8, we will expand our MSP network and enable more partners take advantage of monthly recurring revenue through cloud solutions.”

Partner benefits of the Pax8 and NewCloud partnership include:

3D at Depth Inc., the world’s leading expert in subsea laser (SL) LIDAR technology, survey support services, and 3D data solutions recently launched a remote sensing and remoted data control solution to help operators provide a safe, more efficient environment to their operations while increasing their near real-time 3D data intelligence. The remote sensing and remote data control technology is built around expanded capabilities originally embedded in 3D at Depth’s proven subsea LiDAR technology when the company first commercialized in 2014. With the onset of the COVID-19 pandemic, the recent downturn in the industry, and the race to advance autonomy into offshore oil and gas operations, 3D at Depth quickly phased in the technology as part of their current standard services.

In order to support the decision-making process across production and exploration, the technology development required design considerations from pre-project planning to data processing and control. The goal was to provide near real-time 3D data to help operators make a more informed quality decision to help balance the benefits and costs associated with subsea assets. With this approach, 3D at Depth developed software simulators that can be installed on the vessel prior to the start of any project to simulate a remote scan or metrology. An additional feature provides flexibility for those vessels with low bandwidth communications to shore. 3D at Depth’s Compressed Remote Command and Control solution enables full control with bandwidths of just 6kb/second, allowing data to be collected offshore and stored on the sensor or a topside computer. The near real-time data quality control is achieved using an improved and trusted enhancement of the RIAAT format and newly named, Compressed Range Intensity Angle Angle Time (cRIAAT). This improved feature enables moving a scan location with bandwidths of 256kb/second less than the collection time. This flexibility allows an onshore operator to receive data and start processing with little or no delays to the offshore operation. This approach can be utilized on many offshore applications including leak detection, static field scans, and metrologies.

The flexibility of third-party system incorporation, such as offshore connectivity allows for varying vessel specifications of ship-to-shore communications capabilities. The short base system is capable of running over a normal 4G network without delays. This allows a 3D at Depth Subsea LiDAR Specialist to collect from a customer’s worksite/location or from one of 3D at Depth’s global office locations. This is especially important during extreme weather events onshore or with complex secure locations where external or outside companies have restrictions on connecting to the client network.

A key added value of 3D at Depth’s remote sensing and remote data control solution is the ability to collect offshore, then process and release onshore. The fast turnaround and shore-based Quality Control leverage the company’s resources and expertise across global time zones. From Houston, Texas, to Perth, Australia, and with our centrally located United Kingdom office, 3D at Depth delivers true global remote collection 24/7 without the extended working hours in any one office location.

“With 3D at Depth’s successful track record in applications such as asset inspection and integrity, leak detection and metrologies, and subsidence; our partners supported the idea of integrating remote sensing and remote data control into their projects,” stated Neil Manning, Chief Operational Officer at 3D at Depth. “Customers see real value in applications focused around seabed stabilization issues and offshore production expansion such as in brown or greenfield developments where touch-less metrologies are required. With positive early-stage results, we quickly realized this should be incorporated into our standard service package. The innovation started with the resident vehicle solution where in 2019 the company demonstrated this capability.”